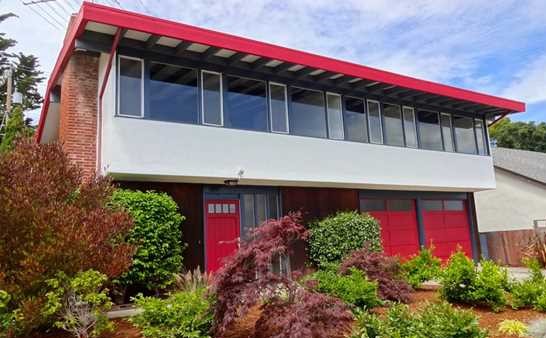 The house I grew up in, just over the coastal ridge from our new house in Pacifica, was built in ultra-modern style in 1956. Like most houses of the day, it had little or no insulation. The roof was sheathed in a newish ‘high-tech’ material, Homasote board, essentially a 2” thick plank made of compressed wood fibers, giving both moderate structural strength and insulation.

Unlike most homes then, my childhood home had post and beam framing with large panes of glass between the posts. You could see a crack of daylight between the beams and the blocking which held them in place; the single glazed windows, with their aluminum frames, gave almost no resistance to heat flow.

Cold in the winter, hot in the summer, the place was an energy nightmare. Very stylish, however.

We’ve learned how to build better in the years since, spurred by the energy crises of the seventies, the rise of fuel costs, and the realization of global warming and climate change. One of the key components of energy conservation is insulation, the material which, like a warm blanket, keep warmth inside during the winter and keep the heat out in the summer. Our new Pacifica house is, by current standards, super-insulated.

During Jerry Brown’s first stint as governor, the State instituted mandates on building’s energy usage. Modest at first, the rules limited the amount of glazing, required that double glazing be used, and required R-11 insulation in walls and R-19 insulation in roofs. R-values are a measure of the effectiveness of resistance to heat flow; the bigger number, the more resistance, the better the blanket.

Every few years the standards evolve and strengthen; the current minimum insulation requirements for new homes in the coastal climate zone is R-38 for roofs, R-19 for walls and floors. Double glazing for windows is still the minimum standard, though the frames and the glass have improved considerably as well.

Here’s what our new house has: R-54 in the roof, R-26 in the walls, R-38 in the wood framed floors, R-6 under the concrete floors. The windows themselves, usually the weak point in the envelope, measure about R4.

One of the interesting things is how many different kinds of insulation we’ve used.

The first insulation we installed was under the concrete slab portion of the first floor. Once you go down a few feet, the ground maintains a fairly constant temperature of around 56 degrees – not that cold, actually – so the insulation requirements are minimal. We had hoped to use a new material called Foamglass. As the name implies, it is a sheet made of tiny glass bubbles, and has the durability of glass. Unfortunately, the manufacture wasn’t currently selling it in the U.S. We settled on Rockwool Comfortboard 80, a highly compressed mineral wool board, 1 ½” thick, with an R-6 insulation value. Mineral wool is formed by spinning or drawing molten mineral or rock materials such as slag and ceramics; it is also immune to water, biologic action corrosion.

Soon thereafter, when the first-floor framing was completed over the crawlspace, we called in our insulation contractor, Charles “Mr. Insulation” Bennett, to install floor insulation. It would be much easier to install it before the floor sheathing was installed – no crawling in the crawlspace required. We had originally planned to use cellulose insulation but this would have required a baffle to hold in the

insulation; we settled on conventional R-38 fiberglass batt insulation, which very nicely sits on the flanges of our TJI framing. Cheaper and easier.

Mr. Insulation has a great reputation in the green building community in the Bay Area. Insulation contractors are notoriously sloppy in their work; Mr. Insulation is not. No sagging insulation, no un-filled corners, careful cutting around pipes and wires. Plus a wealth of knowledge of building science.

We had also planned to use dense-packed cellulose in the roof, but there the problem was that we had too much space to fill. Cellulose is relatively heavy, and it’s weight in the 15” to 17” space we had to fill in the roof would have sagged down the netting used to hold it in place – the drywaller’s would have had a hard time pushing up the ceiling panels against the sag. So we went with blown-in fiberglass instead. It’s the same material as fiberglass batts, but chopped into short pieces. Lighter than cellulose for the same R-value, but more expensive. An average of R-50.  We also have 1” of cork outsolation on top of the roof, which helps block some of the thermal ‘bridges’ of the framing and allows us to avoid ventilating the roof spaces while adding R4 per inch.

The walls are next and last. Here we finally will use blown-in, dense-packed cellulose.  Dense packed cellulose is known for filling nooks and crannies and not sagging over time. Netting is first installed on the inside face of the studs, with holes cut around electrical boxes. Like the chopped fiberglass used in the roof, the loose cellulose is dumped into a hopper, then whisked through a long flexible tube to a hole in the netting, kind of like a vacuum in reverse.

Cellulose is essentially chopped up newspapers, i.e., wood fibers – a recycled and recyclable product. It has some non-toxic additives to deal with mold and fungus and has some ability to absorb and release water vapor as it is transported through the building envelope. It’s relatively cheap. R-22 plus R-4 for the 1” of cork outsulation.

As I write, Mr. Insulation has just completed the floor and roof insulation. With the windows in and the air-sealing done, the house is remarkable warmer, just from the minimal solar heat coming in the windows on a foggy day. I think we’re going to be using the air conditioning more than we expected to…