FOUNDATIONS – WHERE THE BUILDING MEETS THE EARTH

Every building – except maybe those mythical structures we designed in architecture school that were supported by ‘skyhooks’ – is supported by the ground. The part of the structure which actually touches the soil and which anchors the ‘superstructure’ above is the foundation.  If the roof is a building’s head, the foundations are its feet, and constructing the feet can be quite a feat (ok, shoot me, I like puns).

Engineers have devised any number of foundation types; they vary widely depending on the weight of the structure, its design and the soil conditions.  Obviously, if you’re building on rock the foundation will be different than if you are building in a swamp; likewise, foundations for a hillside prone to landslides might be different than those for a flat lot. Weak soils need wider footings; clay soils may need stronger foundations to counteract the forces caused by expansion and contraction of the soil during the wet and dry seasons.

Larger projects or those on complicated terrain generally need a geotechnical consultant to confirm what sort of foundation is best for the site. Their role is to investigate the soil conditions and make recommendations to the structural engineer about what kind of foundation to use.  Generally, their method is to make several borings in the building location and test core samples in the laboratory to ascertain the type of soil, the presence of water, etc. They also look at geological maps of the area to assess the dangers of earthquakes and likelihood of landslides, liquification, or erosion of the soil. They write up this research in the form of a report, and later oversee the foundation construction.

As you might imagine, a foundation structure in contact with the ground – wet, chemically and biologically active as it is – needs to be a strong and durable material that is relatively unaffected by moisture, mold, bugs and animals. The overwhelming choice of material in most parts of the world is reinforced concrete – a mixture of sand, gravel, cement and water, reinforced with steel rods. Essentially, artificial rock with steel to take tension forces.

The liquid concrete doesn’t ‘dry’ the way a mixture of mud would, it ‘cures’, i.e., goes through a chemical process that binds the ingredients together. It generally takes a few hours to get hard to the touch, though full curing takes a quite a while – after thirty days concrete typically has only reached 90% of its ultimate strength. The percentage of the ingredients is important – to much water or too little cement can make the concrete less strong – so accuracy in mixing the concrete is important.

Recently, in an effort to use more recycled materials (a primary goal of green building), some concrete designs use fly ash, slag or other industrial waste products as part of the mix.  We’ve heard good and bad things about this practice – I think the jury is still deciding at this point. There are also admixtures – separate chemical treatments – that can be added to concrete for various purposes. Some make the concrete cure faster, or slower, or give it extra strength. In our own house, under construction as I write this, we are adding Xypex to the mix for our retaining walls to make the cured concrete more waterproof.

Because concrete is a thick liquid when mixed, it needs forms to hold it in place while it cures. A lot of effort goes into building the forms, generally made of wood, which get dismantled (and hopefully reused) after the concrete sets. Well made forms can give a beautiful finish and texture to the completed concrete.

Most houses use one of three common foundations systems:

Both ‘T’ foundations and pier and grade beam foundations leave a crawlspace under the first-floor framing, where piping, ducts, and electrical wires can be placed – accessible for repair or alteration.  In all of these foundations, the wood framed superstructure is bolted into the concrete foundation with large anchor bolts. Any wood in contact with the concrete has to be a naturally rot resistant wood, like redwood, or be pressure treated for rot resistance.

Our own house has a pier and grade beam foundation, with one corner having a slab-on-grade foundation.  In the process, the ground surface has been severely disrupted, it looks like a large bomb went off and left piles of earth randomly strewn around the site. We tried to find a lighter, cheaper, less intensive foundation system but were swayed by our geotechnical consultant and by common building practice (we’re also not far from a seismic fault line). It’s a considerable expense, and it uses a considerable amount of concrete, which has a high carbon footprint.  So the feet of our house have hob-nailed boots on them. Hopefully someone soon will invent the equivalent of a flip-flop for the foundation industry, so we can start walking a bit more lightly on our planet. 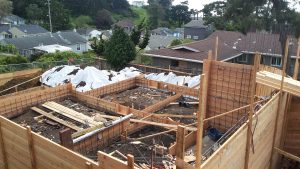