We installed our 2.7 kilowatt (kW)  solar system on our home in San Francisco back in 2008. It was a great deal, part of a lease program through Solar City (now under the wing of Tesla). We paid $29 upfront and have been paying on average $35 per month for the lease (15 year term), while saving $35-80 per month off our PG&E electricity bill. The math seemed incredible to us at the time, and still does. At the end of the lease, we can choose to purchase the system for about $15,000, or have them take it away. My feeling at the time was that solar efficiencies would continue to increase, and after 15 years, we’d probably want a new, more efficient system in any case. 5 years to go; I’ll let you know what happens!

Below is a graph of a typical year’s generation. While the summer does not have the beautiful high bell curve of the majority of our sunny state, the system still has very decent output, even during our “June Gloom”. We had the inverter replaced by Tesla at no cost to us last year, and it has needed no maintenance otherwise. Not only has it been a great financial decision from day 1, to date we have offset 51,411 pounds of Co2, equivalent to 24.5 trees, all on our tiny 3748 s.f. lot!

On our new Net Zero Energy home currently under construction in Pacifica, we will putting on a 7.9 kW system, enough to power the entire house (all appliances are electric) and charge a car, in what is arguably an even foggier neighborhood. More to follow about those decisions very soon! 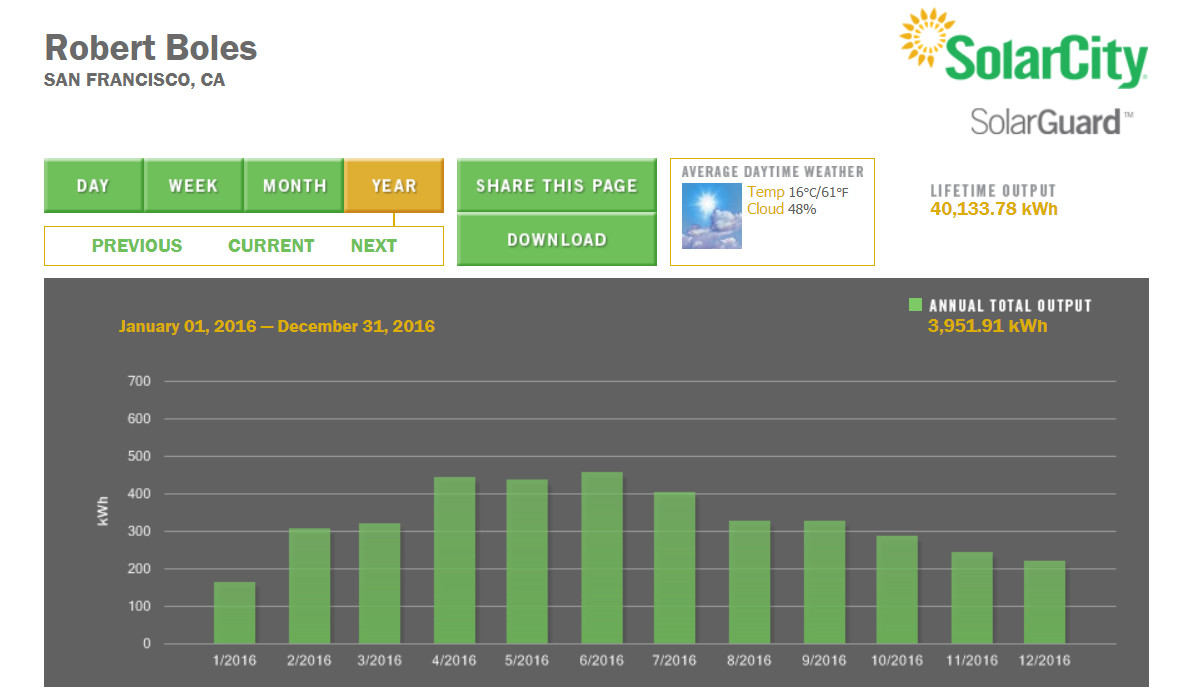 Below is our blog from 2009 after the first year:

After one year of solar generation and data collection, the good news, particularly interesting to you San Franciscans worried about the effects of fog, is that solar does indeed work year round, even in our peculiar climate.

Below is a graph of kilowatt hours generated each month of the year, starting in November 2009 through October 2009.  As can be expected, the lowest month of generation is January with 260.59 kwh (not surprising given the short days of winter), the highest month April, with 500.84.  In most places on our hemisphere, this number would go up higher as the days lengthen in June, but our fog came a little early this year. For those of you interested in the bottom line, I have to start by apologizing for an earlier omission to our monthly costs.  PG&E has been billing us monthly for the costs of energy distribution and other fees, but not our actual energy use, which accumulates every month until the true up period one year later (some months are positive, others negative).  We just paid our true up bill of $196.91, so I owe you a year’s accounting.

I am comparing the total costs of pre-solar 2008 and solar 2009, including all payments to PG&E and  to Solar City for our monthly lease expense of approximately $30 per month.  The comparison is by cost only, and does not compare usage (which to our chagrin, even with our efforts to turn off more lights and replace lightbulbs, has increased by about 300kwh for the year).  The cost comparison also does not reflect the increase in PG&E rates for electricity, which are impossible to account for this year as PG&E has just switched to a time of day metering.