Bee-autiful and ready for spring!

February 15th marks our 28th wedding anniversary as well as the first anniversary of getting our temporary occupancy permit and moving into our new house!  It was a temporary permit as we still had to finalize the front yard landscaping to satisfy the planning department. Besides needing to be ornamental, the front yard has a civil engineering function. Although we collect some of our rainwater in large tanks in the back yard, the front yard tanks we had planned got eliminated for budget reasons, so some method had to be found for temporarily storing and then dispersing rainwater from the driveway and the front part of the house. Without this the water would wash directly into the creek or into the neighbor’s yard, neither of which is allowed by the city.

The solution, worked out with our landscape contractor, John Herbert of Gentle Giants Landscaping, was a series of berms and trenches, cascading down the hill, each of which would store several cubic feet of water. The berms and trenches are heavily landscaped with native and drought tolerant grasses, flowering bushes and fast growing coastal strawberry ground cover. After a rainstorm, the temporary ponds formed in the trenches gradually get absorbed into the mulch and soil and used by the plants. (Check out a video from a recent storm here.) Thus the ‘corrugated’ look of our front yard. 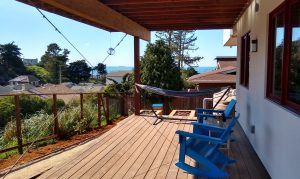 Bob and Elisa kept busy in the fall by building a deck behind the downstairs office – planned for earlier but not budgeted when we built the house. It’s a perfect place for enjoying a beer after a hard day’s work in the office or the garden.

Recently the big push was finishing major landscaping in the side and rear yards. After seeing a deer poke it’s head into our back yard, we first had A1 Fencing build our fences. A deer fence at the rear property line lets us maintain our view to the creek below.  We then invited the Gentle Giants to come back, and their hardworking crew moved more tons of dirt and decomposed granite and then built carefully graded paths and raised, gopher protected planter boxes. We will soon have a (mostly) edible garden: apples, pears, mandarin oranges, lemons, figs, persimmon, plum trees; raspberry, huckleberry, passionfruit, ollala, and kiwi berry vines, as well as blueberry (even a lemonade blueberry!) and pineapple guava bushes. We only hope they mature before the birds and the critters find them. 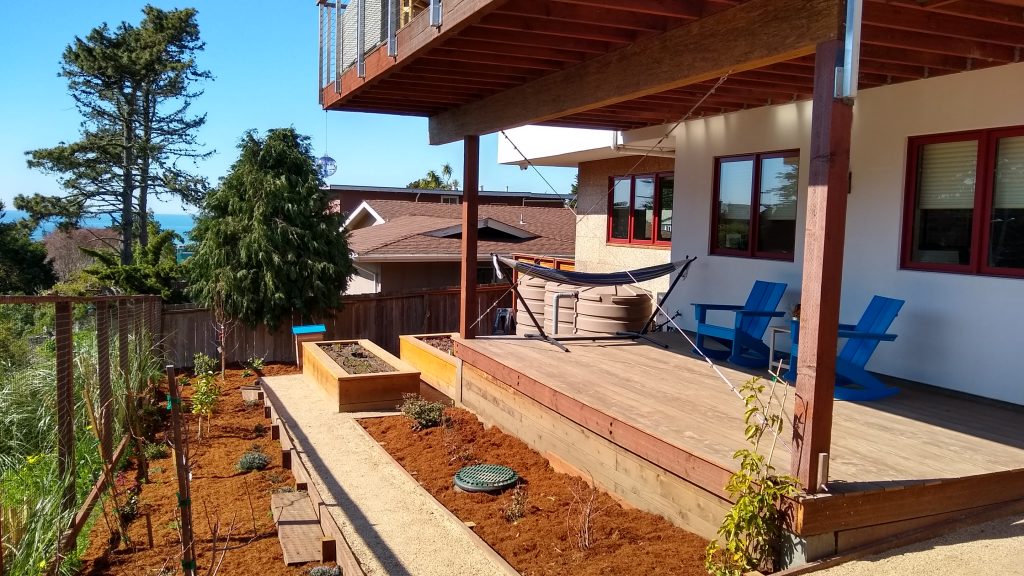 Our next step? Bees! 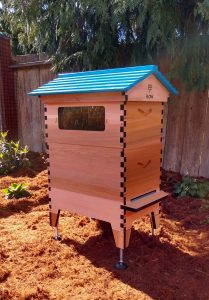 We noticed a sharp decline in the bee population over the past few years in San Francisco, and have not seen more than 10 bees on our property in Pacifica since we moved in. Our edible landscaping is mixed with bee friendly flowers and vines that will bloom throughout the year. We just put together a Flow Hive, invented by father and son beekeepers in Australia a few years ago. A beautiful, very well engineered laser cut kit made of cedar. We’ve made contact with a local beekeeper, Raymond, of NorCal Bees  and will have a “Nuc” a nuclear colony consisting of a queen, drones and worker bees and larvae in 5 full frames that will be inserted in the lower brood box. Christine is super excited; Bob is just a little nervous. We’ll let you know how it goes!

We’re very happy with the house and love our new outlook. Sunset watching has become an almost daily pastime. The upstairs deck has become our favorite room – we’ve used it more in the last year than we used our backyard in San Francisco in 27 years. 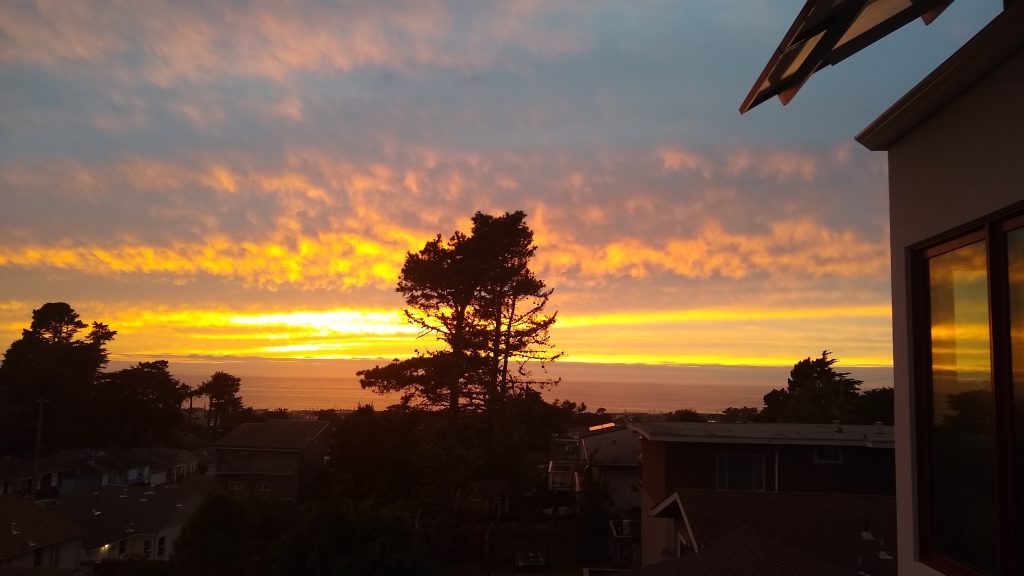 What does the next year hold? Christine is ready for the next challenge, while Bob feels he is still recovering from PTSD…. a bit of an exaggeration but home construction is very stressful.  Here’s hoping the next year will give both of us what we need, along with plenty of fresh produce and honey!