No, this blog isn’t about the latest ‘green’ building material, or about Swiss Chalet style architecture.  It’s about one of the newer trends in residential construction: air sealing for energy efficiency. Some years ago building scientists (yes, there is such a discipline) discovered that the greatest source of energy loss in houses wasn’t single glazed windows, or poor insulation, or inefficient furnaces; it was air leakage. In an average U.S. house, 30% to 50% of the space conditioning energy consumption is lost due to air leakage though the building envelope.

Mind you, this would be a house with closed windows and doors, and reasonably tight construction. Even in good construction there are generally dozens of square inches of cracks, gaps, holes and misalignments where air is pushed in and out of a house by wind pressure and the ‘stack effect’, when hot air rises and is displaced by cold air. So far from being like a pressurized balloon – a good metaphor for a well-sealed house — a house is more like a sieve. Or maybe a cheese grater, to get us back to our original metaphor. 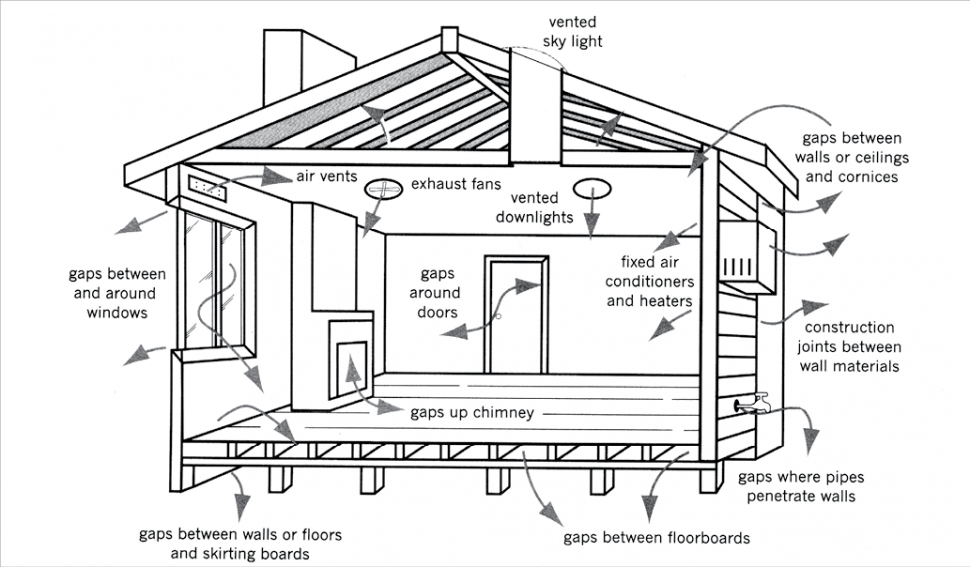 So how does one turn a sieve into a balloon? The technique applied most often is to create a simple box-like structure with plywood on the exterior surfaces – plywood being generally air impenetrable. The joints are sealed with special tape, as are the joints around windows and exterior doors. Lower wall plates are set over double lines of sealant or rubber gaskets; electrical boxes are gasketed; the space around pipes and conduits that penetrate the outer skin of the building are carefully sealed. Projecting structural elements, like rafter tails and cantilevered decks, are eliminated in favor of add-on structures, so that the plywood skin can stay as intact as possible.

Once the skin is sealed, the air-tightness is tested using a blower door, which is a big fan sealed into the front door opening which blows air in (or sucks it out) while the pressure is monitored and the air leakage calculated. It can be a very annoying experience, we are told. Even careful craftsmen are sometimes frustrated by how many leaks show up and by how hard it is to seal them. But by using smoke generators, and feeling drafts by hand, the holes can be found and plugged. The best houses achieve an air tightness of less than .5 air changes per hour at 50 pascals of pressure — which sounds like there is still a lot of air movement. However, considering the average house has more like 10 to 20 air changes per hour, that’s a very tight house. As there is so little air leakage, the heating and cooling systems can be reduced in capacity (in some climates even eliminated), which helps balance the extra cost of the air sealing effort.

Naturally, with such a tight envelope, there are concerns about ventilation.  Houses need to breath out water vapor, produced by humans and their activities, as well as carbon dioxide, for the health of the occupants.  So well-sealed houses need good ventilation. It turns out that the amount of air needed for ventilation is much less than the amount squandered by air leakage, and when it’s handled by a Heat Recovery Ventilator (HRV), the heat within the exhausted air is exchanged with the incoming air, so relatively little energy is lost. As a plus, the fresh air being taken in is filtered, so people with allergies or asthma get a break.

To sum up, well-sealed houses use less energy, are healthier, and much more comfortable than their leaky counterparts. And who wouldn’t rather soar in a beautiful balloon than cringe inside a cheese grater?